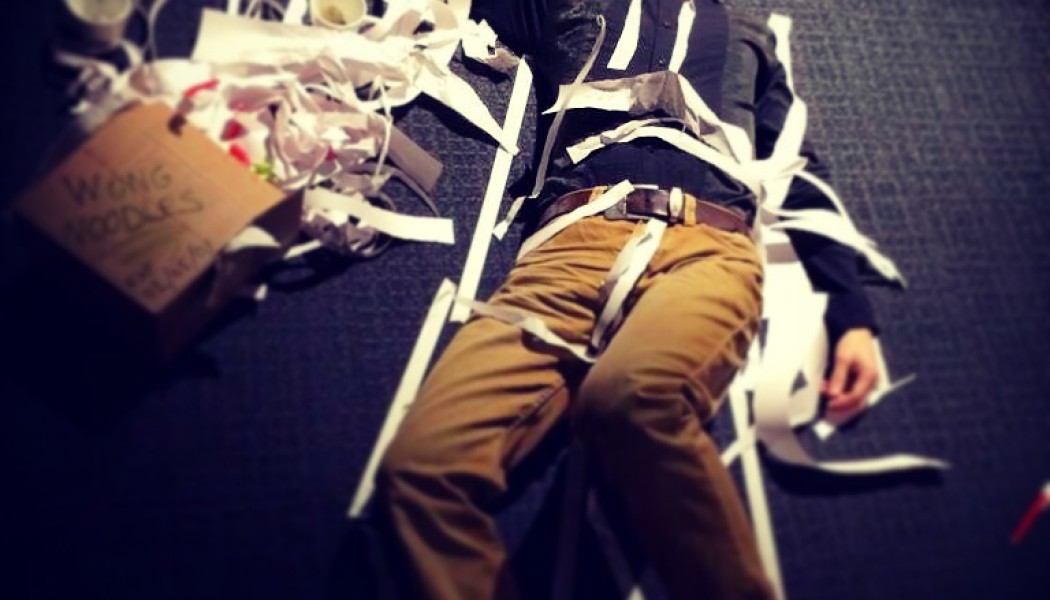 Finding ways to ignite the imagination of many

As I lead the first group of festival participants onto Lincoln Center’s Hearst Plaza, we’ve been battling a number of technical issues. The WiFi is cutting in and out and the phones that we’ve rented are freezing and crashing. On top of that, our Raspberry Pi-enabled Rotary Phone isn’t playing nice with the local beacon network. Meanwhile, teams on 4 different continents standby in cafes, offices, bedrooms, living rooms and co-work spaces. Over the course of the next 90 minutes they will lead festival participants, who are thousands of miles away, through a collaborative storytelling experiment designed to transform Lincoln Center into a crime scene.

Today is almost 365 days from when we first announced the project from the stage of the New York Film Festival’s Convergence section. An ambitious project that has evolved over the past year with what now amounts to a little over 1,000 collaborators stepping in and out as Sherlock Holmes & the Internet of Things ebbs and flows. As it transforms and evolves, the project has generated a unique experiential learning environment that encourages participants to apply creativity to adaptively problem solve. We’ve come to refer to it as rabbit hole learning, as participants tumble through the opening, we’re working hard to make them comfortable with the unknown.

It is human nature to want to know where one is heading, to lay out a map and understand the steps it will take to reach a goal. However, the disruptive nature of the digital landscape we find ourselves in has removed what was once a well-worn path. Gone for many are the days when you could lock your sights on a single career. Now it is common to have two or three, if not more, careers in a lifetime.

Each year I greet a new group of highly intelligent, ambitious and wonderful students from all over the world. The course I teach at Columbia University in the School of the Arts is entitled, “Building Storyworlds: the Art, Craft & Biz of Storytelling in the 21st Century.” However, I’m struck by the students’ struggle to be adaptive and to embrace the unknown. There is a desire for perfection and for many students, it is difficult to embrace moments that could, in fact, lead to failure.

My educational path was one of a journeyman. At 19, I was running film from sets to the lab, sleeping in my car and returning the next morning with video dailies. I learned by doing and ascended through the ranks stepping from a film runner to a production assistant to a camera assistant to a director of photography to eventually, a paid director. Along the way I experimented and made my own work with friends. I tinkered with computers, fell in love with technology and attempted to place myself in moments that I felt would challenge me. So my visions of a University, many of which were pulled from what I’d read in books or seen on the silver screen, were cast in the light of experimentation. To me, a University was a place where students and faculty came together and tackled interesting, intellectual challenges; a gathering of the intelligentsia where people worked across various disciplines and schools in an effort to embrace the unknown and learn from each other. I held images of flipped classrooms and highly collaborative learning environments in my head. In retrospect, I was superimposing my experience in the film industry, which is one of the more collaborative art forms, onto my ideal of a University.

Sherlock Holmes and the Internet of Things is an experiment that addresses many of these variables. We created a space that enabled participants to be seen as peers and collaborators. Most importantly, the learning environment allowed the participants to become comfortable with the fuzziness and ambiguity of a project that is shaping itself in situ. This is a luxury that many don’t have in the “real” world. But in some regards it is not that far from the concept of a pivot that has become so common place for many startups. For instance, Twitter started as a podcasting service prior to becoming the massive micro communication platform it is today. Instagram was a geolocational checkin app before shifting to a photo sharing giant. The reality is things change no matter how well planned you are. Things arise that will take you by surprise and often the elements that seem like a failure can lead to a unique breakthrough.

Little bets are a way to explore and develop new possibilities. Specifically, a little bet is a low-risk action taken to discover, develop, and test an idea.  –  Peter Sims

The stakes are high at Lincoln Center. Just as we are set to start the first show of the day, the data network for the phones kick in and our remote Killers are able to lead the Sherlocks who are on the ground at Lincoln Center. Together, they perform a cat and mouse exchange that has them co-creating crime scenes, populating those crime scenes with objects / clues and collaboratively solving their cases through storytelling.

One of the most dynamic aspects of the day comes from an unexpected constraint that’s been placed on us by Lincoln Center. Over a year of prototyping we’ve always used tape to trace the outlines of bodies within the crime scenes that are created. However that is not possible at Lincoln Center and instead we are challenged with using actual bodies.

In the weeks leading up to the event, we’d gone back and forth on whether the bodies should be characters dressed in period clothing, in order to help establish a particular time setting. Like many moments throughout the project, we turned to our initial design principles for guidance. The result — we decided to go with bodies dressed all in black that resemble shadows. The fact that they have no characteristics becomes a strength as participants are able to easily cast their own imaginations onto them.

After the bodies reenact each of the crime stories, we leave room for a final unmasking of the actors playing the “bodies.” Every time the bodies reveal their identities, there is an audible gasp from the crowd. In fact, in their exit surveys, participants at Lincoln Center and those remotely connecting both noted that the role the bodies played was one of their favorites in the experience. Other feedback we received echoed the value of granting agency throughout the experience, as the parts of the collaboration that were jointly shared resulted in powerful moments, and interactions where participants attempted to hold control over certain elements of the experience lead to frustration.

While elements of the tech create challenges throughout the day there is one takeaway that resonates. Since we spent a year rooting the design within the human experience of our participants, the tech glitches don’t derail the experience. Instead, they point to the moments where the design needs to breath. In doing so, it becomes obvious how the tech needs to become ubiquitous. We don’t need screens in this experience. The tech should feel enchanted, while also being invisible and most importantly, it should always be serving to ignite the imagination of the participants.

What participants had to say

“When the story came together I could visually see the scenes occur.”

“Seeing two teammates improv at the end. It was more important there was an entertaining performance loosely inspired by the clues than a perfectly logical solution.”

“My favorite part was watching bystanders interact with the experience and feeling as if I was a part of something unique & interesting.”

Sherlock Holmes & the Internet of Things (Sherlock IoT) is an ongoing prototype developed and run by the Columbia University Digital Storytelling Lab that explores new forms and functions of story. Developed out of the Film Program at the School Arts and powered by Columbia University School of Continuing Education (SCE), Sherlock IoT is designed to be an open R&D space that experiments with shifts in authorship and ownership of stories, the massive collaboration also uses a detective narrative to examine the policy and ethical issues surrounding the Internet of Things.

The goal of Sherlock Holmes & the Internet of Things is to build a massive connected crime scene consisting of smart storytelling objects. This fall teams will create, design, build and test prototypes that will be plugged into a number of crime scene locations around the world.