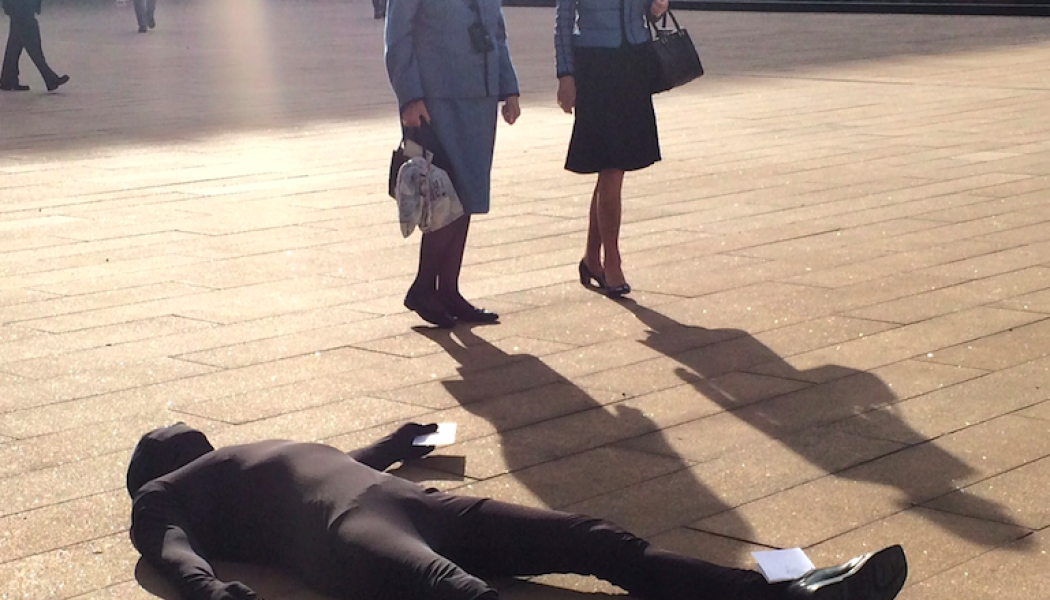 Learn Do Share’s methodologies and frame works form the foundation for the Columbia Digital Storytelling Lab (Columbia DSL). In fact Columbia DSL’s Sherlock Holmes & the Internet of Things prototype embraces the design principles of Learn Do Share and we’re taught directly in the School of Art’s MOOC.

They resemble a line of ants transporting food back to a colony. Some carry rolls of tape, others clutch massive reams of butcher paper and a select few are the keeper of the scissors.

Over a 100 people follow me out of the National Stadium located in Warsaw. We’re on a collective mission. Over the course of 90 minutes, the group will create a massive crime scene complete with victims, killers and motives. Together they will transform into a collaborative Sherlock Holmes as they scour through clues and attempt not to containment their crime scenes.

Welcome to Sherlock Holmes & the Internet of Things, a prototype of the Columbia Digital Storytelling Lab that experiments with shifts in authorship and ownership of stories while exploring the ethical and political implications of IoT (Internet of Things). For the last 10 months, Nick Fortugno and myself have staged meetups throughout NYC. A steady stream of storytellers, game designers, hackers, makers and fans of Sherlock Holmes have flowed through the meetups, in an attempt to reimagine the works of Sir Arthur C. Doyle. From a few hours to full day sessions – we’ve designed, built and prototyped the foundation that will be used to stage a series of connected crimes scenes around the world later this fall.

By the end of 2015, it is anticipated that there will be over 1.5 trillion sensors in the world. Everything from cars to household appliances to everyday objects are rapidly connecting to networks. The Internet of Things is positioned to be the largest deployment of connected devices, dwarfing PCs, tablets and smartphones combined. The opportunity this presents for laying storytelling over the physical world is exciting. Stories that can aid the discovery, personalization and connection of people to places and things. With any new emergent form of storytelling comes the need for a grammar. So what will a 21st Century re-write look like?

We’ve run 15 prototypes in 10 countries since the project started last September and a number of design principals have emerged.

Over the course of my career, I’ve come to realize that creativity rests at the edge of failure. It is within the uncomfortable moments near the edge that some truly amazing things can emerge. However the entertainment industry is risk adverse and therefore most innovation is stifled. Market conditions limit the way stories are told and sold, and as a result emerging opportunities are often shaped by the models that have come before them. A focus of the Columbia Digital Storytelling Lab, is to create an open space for R&D — to build resources (information, shared processes and eventually software libraries) to explore new forms and functions of storytelling.

Sherlock Holmes & the Internet of Things is an ambitious project. With meetups in close to 20 cities, collaborators from over 60 countries and more than 1,000 people vying for 250 slots within a pilot MOOC — the project presents many interesting challenges and opportunities.

As we move forward, we’ll be documenting the project and sharing the results. We’ve crafted a Sherlock Challenge RFP (request for prototypes) that will have teams finding inspiration from the works of Doyle, as they create smart storytelling objects, that plug into a number of connected crime scenes around the world.

Meanwhile outside the National Stadium, scattered throughout the grounds, a number of crime scenes have emerged. Crafted by a group of strangers who didn’t know each other a mere 90 minutes before. The participants easily slip into a playful state, as they take on the role of Sherlock Holmes. Those formerly known as the audience have now become collaborators in a global storytelling experiment.